An interactive, self scoring dart game for a new generation of players. 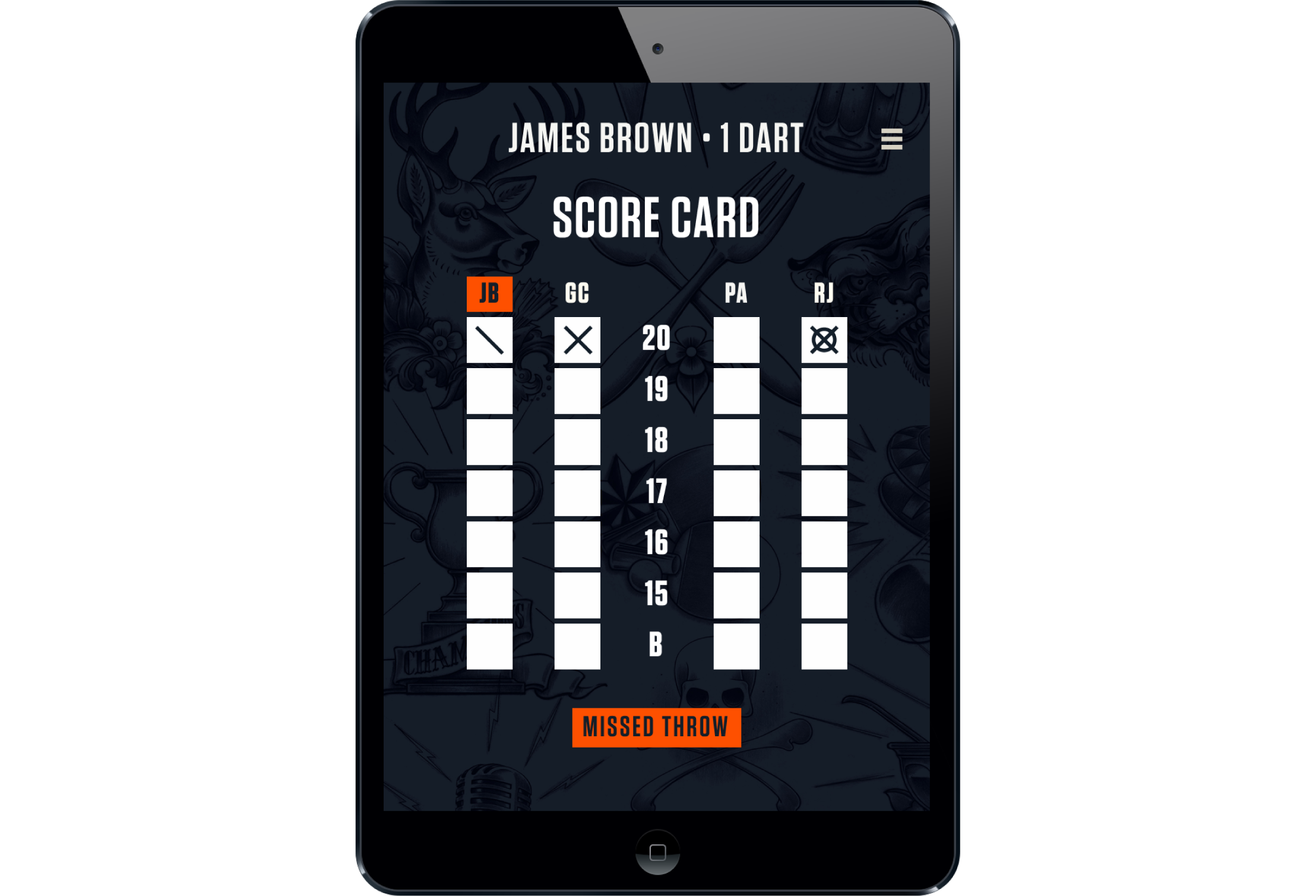 To add to their arsenal of gaming experiences we created the Punch Bowl Social Dart Lounge- a self scoring, multiplayer dart experience - to be installed at locations nationwide.

The Dart Lounge utilizes computer vision and specialty cameras to detect where standard, steel tip darts land on a regulation dart board. The dart game, which spans across a tablet, TV, and physical server, features animations, auto-updating, and a robust admin section.

Take a look at the video below to see the dart lounge in action.

We recently installed the first version of the Dart Lounge at Punch Bowl Social’s Denver location. Once on site we were able to modify our algorithms to meet the specific environmental factors present at this location

We began by constructing an initial version of the dart lane, consisting of a regulation dart board, Intel RealSense cameras and lighting. Using this dart lane model, we began work on an image processing system with the ability to capture the position of a thrown dart using Open CV. 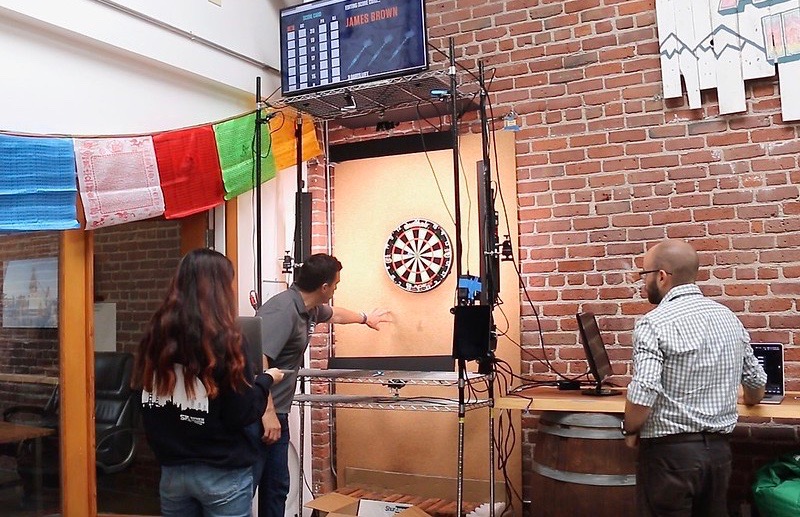 Our goal during this phase was  the ability to distinguish between thrown darts using color, time and movement, with an 80% or better degree of accuracy, while additionally displaying the tracked dart’s score on a digital screen.

In order to capture the position of each dart, we configured three Intel Real Sense cameras on the dart lane in such a way that each has a unique view of the dart board. 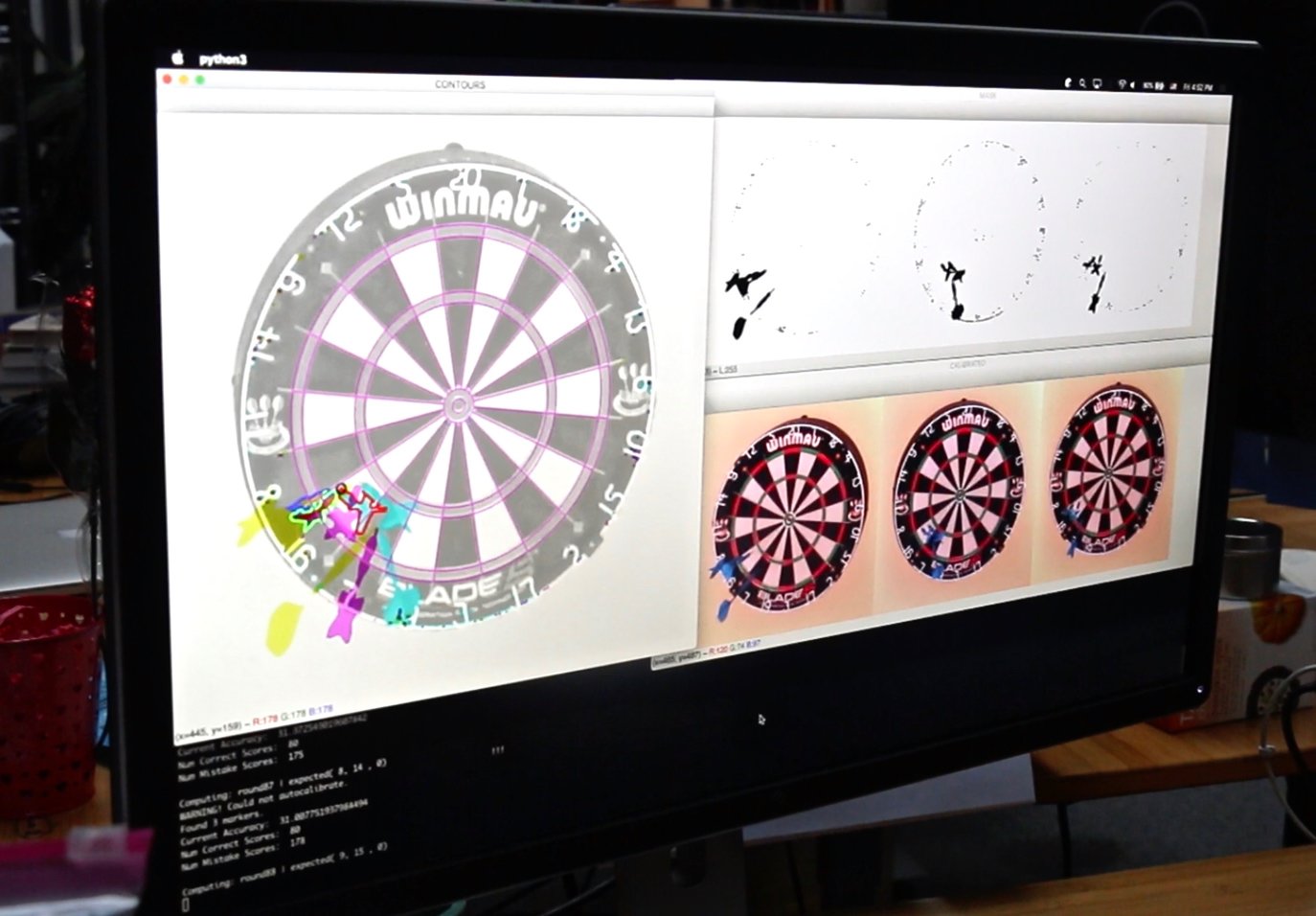 Once a dart is thrown, the algorithm and logic allows each of the cameras to vote on where they believe the dart has landed. If any of them are not very confident, their vote gets thrown out - if all three of them vote differently, the the votes that are closest to each are weighed appropriately in the algorithm.

Once we had reached our accuracy goal, we began the design and development of the Dart Lounge pilot. We created a foundational game play engine that allows players to sign up on a touchscreen tablet, pick the game they want to play, and start game play.

Our framework then tracks player turns, number of darts thrown, and when the game is completed. Throughout the game, the scoreboard is displayed on a television screen placed above the dartboard.

It was important for us to factor in the ability for the computer vision code registers that a dart has landed, ensure that all parts of the system register that event immediately, and display that information on the iPad and display in real time.

To achieve this, we built the Dart Lounge software on an event driven architecture, using websockets between most of the application. This allowed for quick, real time communication, providing a true gaming experience.

Punchbowl Social sought to merge the social elements of their locations with a digital dart game that was characteristic of their brand.

Because they hoped to utilize a standard regulation dart board and steel tip darts, the initial challenge included a period of preliminary research into understanding how we could utilize cameras and computer vision to detect precisely where each dart landed on the board.

From there, the challenge became the creation of a functional game play engine that would track darts thrown, player turns and scoring. We used the mental model of the bowling lane console and display that most people are familiar with, and sought to modernize it for a new generation of players.

Because the Dart Lounge would be installed in a bar setting, the goal was to create a simple and intuitive system that patrons would have no trouble navigating, even after having a few drinks. Additionally, we hoped to merge the Punchbowl Social’s brand elements into the app and display.

When designing the dart lounge application, we wanted to create something that was simple, intuitive, and branded to Punch Bowl Social. We utilized minimal colors to make relevant information pop out and made sure the most notable elements on the tablet and TV always had to do with the active player’s turn and the darts themselves.

We anticipated that there may be maintenance and support issues after the Dart Lounges were installed so we created an intuitive hidden admin portal on the iPads used during gameplay.

Behind a hidden gesture and passcode there are several features an admin user could use to ensure that the Dart Lounge is connected to the internet, has the cameras running, that the cameras are pointed in the right direction, downloading new updates for the software, etc.

We recently installed the first version of the Dart Lounge at Punch Bowl Social’s Denver location. Once on site we were able to modify our algorithms to meet the specific environmental factors present at this location - specifically allowing for the differences in lighting, which plays a key role in dart detection.

The initial Dart Lounge launch has been successful. We’ve been seeing in analytics that people have been using it every day, and have begun receiving feedback that will allow us to continue to improve the Dart Lounge experience.