Prototyping Your First IoT Product? Here’s What to Expect

The Internet of Things (IoT) isn’t just buzz; it’s big business. Connected technology initiatives are making waves at Microsoft, Dell, and SAP, but they’re also cropping up in unexpected everyday places like farmlands, basketball courts, and bicycle races. Before we know it, the IoT will manage our homes, tend our gardens, and even monitor our mailboxes.

By 2020, Gartner predicts that our world will contain 26 billion connected “things,” an almost 30-fold increase from the 900 million connected products sold in 2009. While the IoT will continue to grow, chances are good that it’s at the height of its hype. In the near future, IoT products will be as ubiquitous as cell phones are today, so now’s the time to get involved.

How Is Prototyping an IoT Product Different?

Building a new product — especially in uncharted territory — is risky. That’s why your business must begin the process by prototyping. But prototyping an IoT product is a little different than the prototyping process your team is probably used to. Here’s what to expect:

If you’ve prototyped a web application or mobile product before, whatever you prototyped likely wasn’t far from production. But IoT products are more complex. The hardware you’d use to prototype isn’t likely what you’d use when mass-producing the IoT product. The software, too, is more challenging, and there are plenty of third-party integrations to consider.

Get ready to build your own components.

Part of being a pioneer means that there isn’t much of a road map to follow. You’ll need to pave your own way. So unlike prototyping for an Apple App Store product or other traditional software, you won’t be able to rely on preexisting libraries or architectures. While more prebuilt components will become available as the IoT grows, today’s developers will need to start nearly from scratch.

When you’re prototyping a mobile or web application, it’s easy to push the software to hundreds of beta users and get feedback. But because IoT products involve a software and hardware layer, you might need to ship and deliver physical devices to your beta group. In addition, consumers aren’t yet familiar with IoT technologies, so get ready to provide detailed setup and use instructions. Generally speaking, the testing and feedback loop is longer and more complex than with traditional software products. 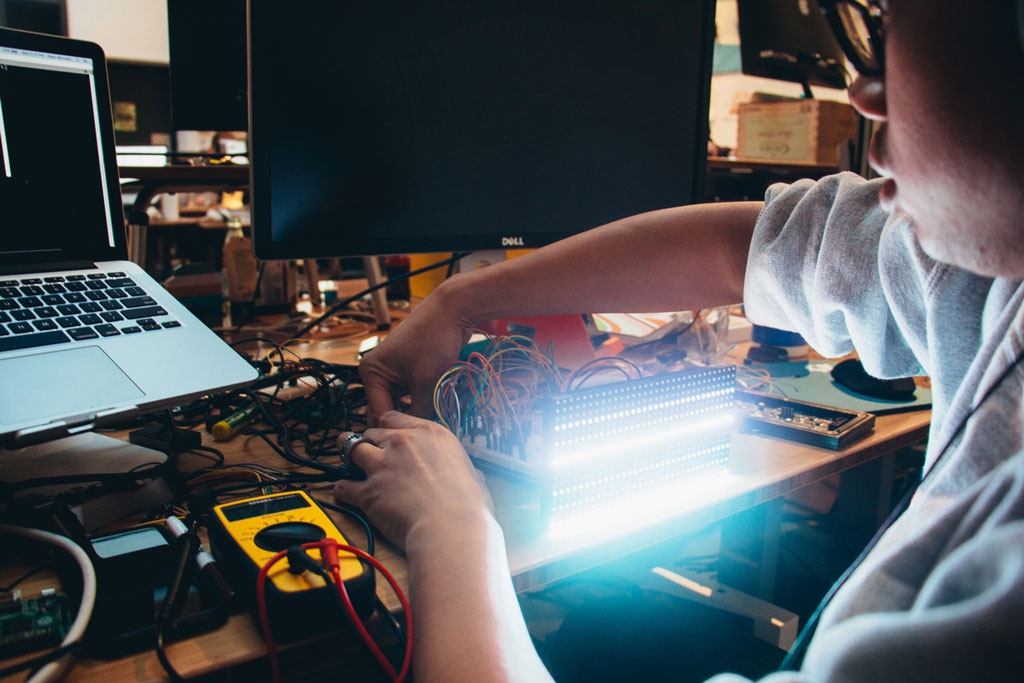 The 4 Stages of IoT Prototyping

If you’re ready to embark on the IoT prototyping path, prepare for these four stages along the way:

When prototyping your IoT product, it’s essential to hone in on your product’s riskiest assumptions. If you’re unsure of how you’ll get mobile devices to speak with your product, for instance, that’s a task your first prototype should focus on. This forces you to make major product decisions upfront rather than months into the development cycle, at which point you’ve probably spent tens of thousands developing a faulty product.

Once you’ve decided which problems your prototype will address, it’s time to start building. That means discovering which technologies you’ll use to create the product, and it’s a big decision. Beware that this will require some experimentation. You’ll likely research, develop, and ultimately throw away code during the process. It may seem like banging your head against the wall, but channel your inner Edison. You’re not failing; you’re discovering what technologies won’t work for your product.

For instance, we recently worked with a client on an IoT product that uses Bluetooth devices with many simultaneous connections to transfer data. The challenge involved experimenting with multiple Bluetooth devices over a multimonth span. Eventually (and exhaustively), our team found one that stuck, and you will, too. We’ve built multiple IoT products at Yeti, and that’s meant trying out a variety of tools for front-end and back-end functionality.

3.  Start building to prove your concept.

Now that you’ve figured out what problems you want to solve and which technologies to use, it’s time to start building. This is our favorite stage of the entire prototyping process. We recently prototyped a fun IoT product called Emoji Ticker. Our goal was to create an LED ticker that flashes emojis in response to individuals posting excuses on our Chelsea Handler: Gotta Go app. The app helps users get out of sticky situations by setting “excuses” via texts or phone calls, which are then sent to your phone at a later time.

We faced a real challenge, however, in getting the LED screen to display the emoji contained within Gotta Go’s excuses. After lots of headaches and online tutorials, we learned to properly wire things together. But once we’d established a proper connection, the rest of the prototyping process went smoothly. Lesson learned: Start building early, and power through the hiccups.

After getting your IoT prototype up and running, get ready to smooth out the remaining issues. These bugs might be software-related (unstable code or broken features), or they could be hardware-related (a screen that flickers or a poor connection point). Developers like to joke that this stage of prototyping, which is typically viewed as the “last 20 percent,” often ends up being 80 percent of the hassle of product development.

For Yeti, the troubleshooting stage was crucial to creating Emoji Ticker and other IoT products. We always get excited watching a product come together. But as we near the end of the adventure — where deadlines loom and unforeseen fiascos crop up — we inevitably feel some frustrations. Certain features take longer than expected to develop, user interfaces need tweaking, and the hardware needs perfecting. If you reach the troubleshooting stage and get frustrated, don’t quit. You’ve made it this far, and your working prototype is just around the corner.

Prototyping your first IoT product is like running your first marathon. Taking your first steps in a long, uncharted journey is scary, and there will be bumps and bruises along the way. But there is a finish line, and your company must keep pushing. The product you’re building is at the cutting edge of technology — one that major brands like Microsoft and SAP are racing toward themselves. Get prototyping now to beat them there.

For a more detailed discussion on the Internet of Things, check out our new whitepaper on Living, Learning, and Working in 2020 with the Internet Of Things.